Recently, Cloudflare launched Is BGP safe yet?. And they immediately answer their own question: No. 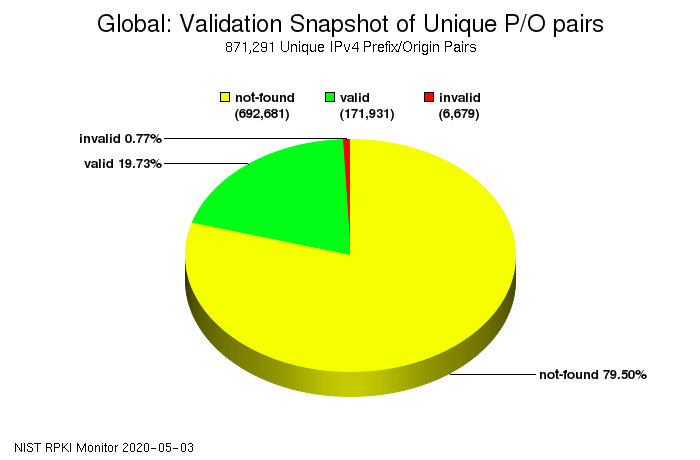 So globally, for just about 20% of all prefixes (address blocks) RPKI checks out (valid). For a little less than a percent, the way the address block is routed is not in agreement with the ROA (invalid). For the remaining nearly 80% of prefixes, no ROA is published (not-found). However, these numbers are different in various parts of the world:

These numbers show how many address owners are publishing ROAs. This is very easy to do. Here in the RIPE region, it's just a few clicks in the LIR portal. The harder part is filtering based on RPKI. For this you need validator software, for which there are now several choices, and then you need to hook up the validator to your routers, explained here for Cisco and here for Juniper.

For some time, I feared networks would hesitate to filter out prefixes with the RPKI state "invalid", because there's still several thousand prefixes that are invalid. However, it now looks like there are enough big networks doing this that the onus of working around the resulting breakage is correctly put on the address owners / networks that cause the "invalid" state rather than the networks doing the filtering.

Is BGP safe yet? as well as a RIPE labs RPKI test tell you if your ISP is filtering RPKI invalid prefixes, with Cloudflare also naming and shaming the big ones that don't.

The RPKI Observatory has a list of prefixes that have the RPKI invalid state and are therefore unreachable with RPKI filtering enabled. The Route Views collector now also has RPKI, letting you check the state of individual prefixes (telnet route-views.oregon-ix.net). Or use the NLNOG RING looking glass.