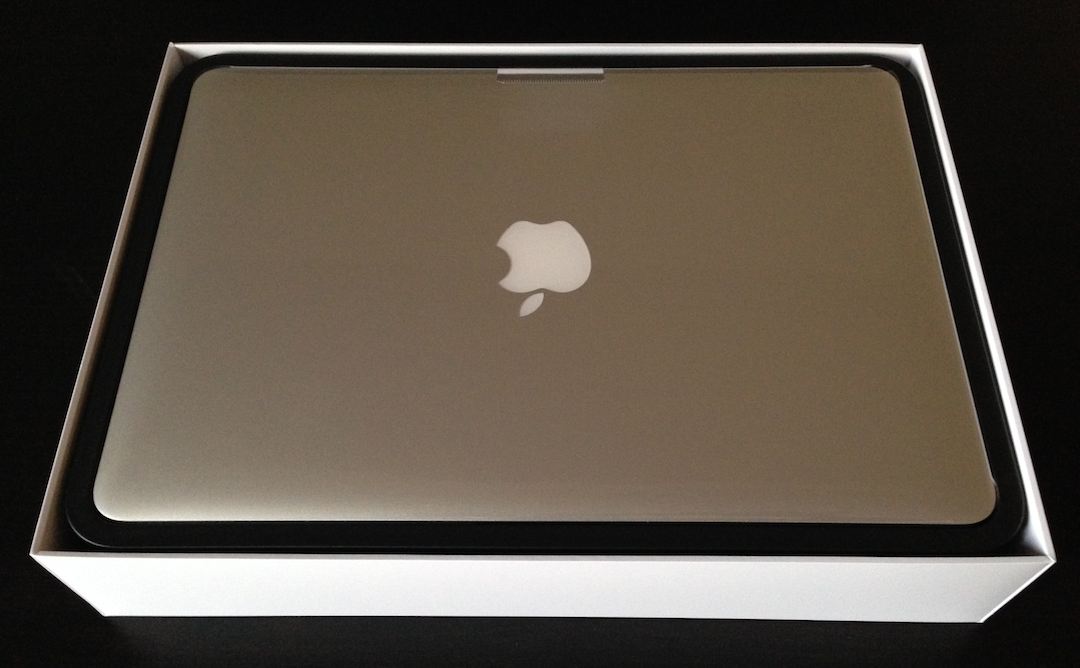 General impression and the screen(s)

After using the new high resolution 13" Haswell MacBook Pro for almost three weeks, it's high time that say something about my general impressions and discuss the high resolution display.

A hair over a kilo and a half isn't much for a "pro" computer, but then again, it's not ultra-light, either. When I pick it up with both hands it feels light, when I use only one hand, it feels a bit heavy, especially compared to the MacBook Air. The MacBook Air's tapered body is slightly nicer to work with in certain circumstances, like using the computer at a desk. Then again, the MacBook Pro is a bit smaller in the width and height directions, and I really like the fact that the edge around the screen on the MacBook Pro is black and covered with glass. When I wrote my review of the MacBook Air for Ars Technica, I wrote "unlike with my previous computers, the screen doesn't appear to touch the keys when the lid is closed, so no oils are transferred from the keys to the screen". I was wrong about that, and the screen was actually affected by finger grease, now having brighter and darker regions. Hopefully the MacBook Pro's glass screen won't suffer from such issues. At the very least it's easier to clean the screen all the way to the edges with little or no risk of cleaning fluids getting inside.

The keyboard is the same as before—including the annoying fact that the light sensor doesn't really pick up that it's day and the keys don't need to be illuminated. At first glance the trackpad seems a bit bigger, but that's because the computer is actually slightly smaller.

The computer wakes up from sleep incredibly fast: by the time the lid is completely open, the password prompt is waiting for input. The PCIe-based solid state drive is extremely fast. Copying some large files to /dev/null happened at 820 MB/sec.

This computer has lots of things going for it, but for the most part these are things that it shares with the current 13" MacBook Airs. The one thing that really sets apart the MacBook Pro is its high resolution screen. (As soon as the Airs get these, I really don't see how Apple can continue to sell both computers side-by-side.)

And yes, it's all that it's cracked up to be, and more. Forgetting the resolution for a moment, this is the best laptop screen I've ever used: despite the glass cover, it resists reflections very well, it's bright (when needed), the black levels are pretty deep and you can view the screen from any angle you like. The colors are well-saturated, unlike on my old Air. When running Cinebench on the Air, I was under the impression that the test scene below was in black-and-white. But on the MacBook Pro I noticed that several of the spheres are actually a pale green. 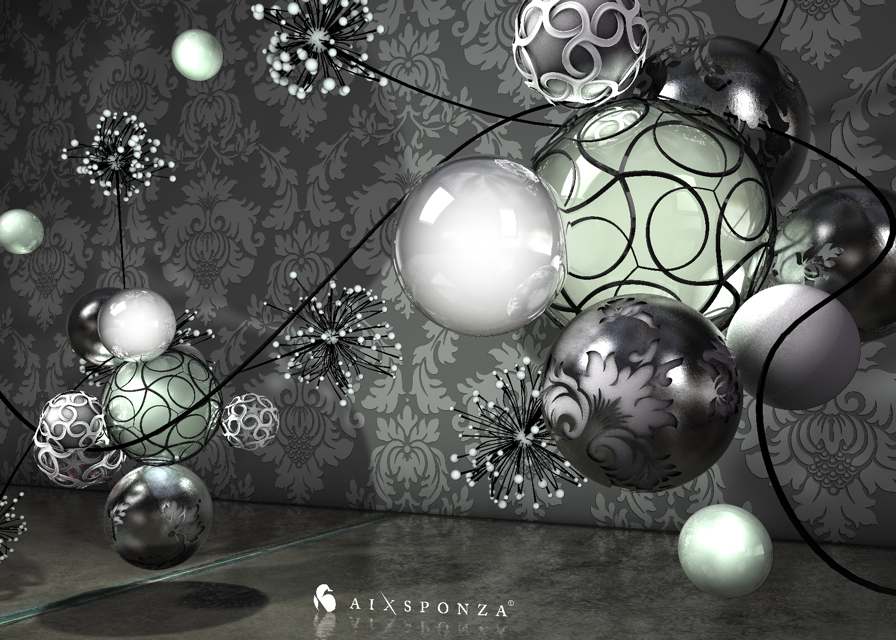 But how can I forget about the resolution? Text on a computer screen finally looks like text. You know, with actual typography. Although the resolution is "only" 227 pixels per inch (9 pixels per millimeter), while even the cheapest printers start at 300, text looks much better on this screen than it does on an inkjet printer. I guess the font smoothing and sub-pixel rendering really help. On regular screens, they'd often make small type blurry. But on this high resolution screen, even the smallest letters look sharp. Also, thin fonts look extremely good, while heavier ones don't benefit as much from the increased resolution.

A year ago, when the first "retina" MacBook Pros arrived, Apple applied the same strategy to deliver a high resolution experience as they did on iOS: what was previously a pixel is now a "point" and a point is made two high resolution pixels wide and two high resolution pixels high. Text is automatically rendered at the increased resolution. But images need to be made available in double the resolution. You can see how this works on many websites today: text is sharp, images not so much. For photos, the effect isn't too terrible, but line art and text in bitmap images looks pretty bad.

However, many applications render their text and graphics to an offline buffer and then copy that buffer to the screen. Until such applications are modified to increase the resolution of these offline buffers, the result is blurry text as well as images. So a year ago, lots of applications didn't look very good on the new high resolution MacBook Pros—somewhat worse even than on an old, low resolution screen. But a lot can happen in a year, and I haven't encountered any applications that don't take advantage of the high resolution screen so far. But if you want, you can do a Get Info for an application in the Finder, and check the "open in low resolution" checkbox. Which I'm now going to uncheck for Pages, the program I'm using to write this review.

For people coming from a MacBook Air, there is one caveat: the 13" MacBook Air has had a 1440x900 pixel screen for some time, while the 13" MacBook Pro has a 1280x800 point screen. So less stuff fits on the Pro's screen than on the Air's screen. You can typically scale your documents to the size you need anyway, but the user interface starts to take up a lot of space with such a relatively small screen. For instance, in the new Keynote, the slide navigator and the inspector take up nearly a third of the width of the screen at 1280x800.

However, you can go into the display settings and opt for scaled "more space" resolutions. The first one makes the screen look like it's 1440x900, the second one like 1680x1050, and at the opposite side there's 1024x640. However, these still use the "HiDPI" pixel doubling, so to arrive at 1440x900, the screen is rendered as 2880x1800 behind the scenes, and then scaled to the screen's native resolution of 2560x1600. The result is that the scaled resolutions are very nearly as sharp as the native 1280x800 resolution. In my relatively casual use the MacBook Pro's HD5100 Iris GPU has no trouble keeping up with all these pixels.

A few years ago, I had a colleague who was very dismayed that the new Mac laptop (I don't remember which model) she got would only power one external display. She really wanted two. The MacBook Pro is happy to oblige. You don't even have to turn off the internal screen, so you can have a total of three screens. And then use the Apple TV as a wireless fourth screen. The two Thunderbolt 2 ports can each power a Thunderbolt display, or, with the right cable or adapter, DisplayPort, DVI, HDMI or VGA display. There's also the HDMI port. So you can plug in three screens, but only the first two and/or the HDMI-connected screen and one connected to a Thunderbolt port will work. 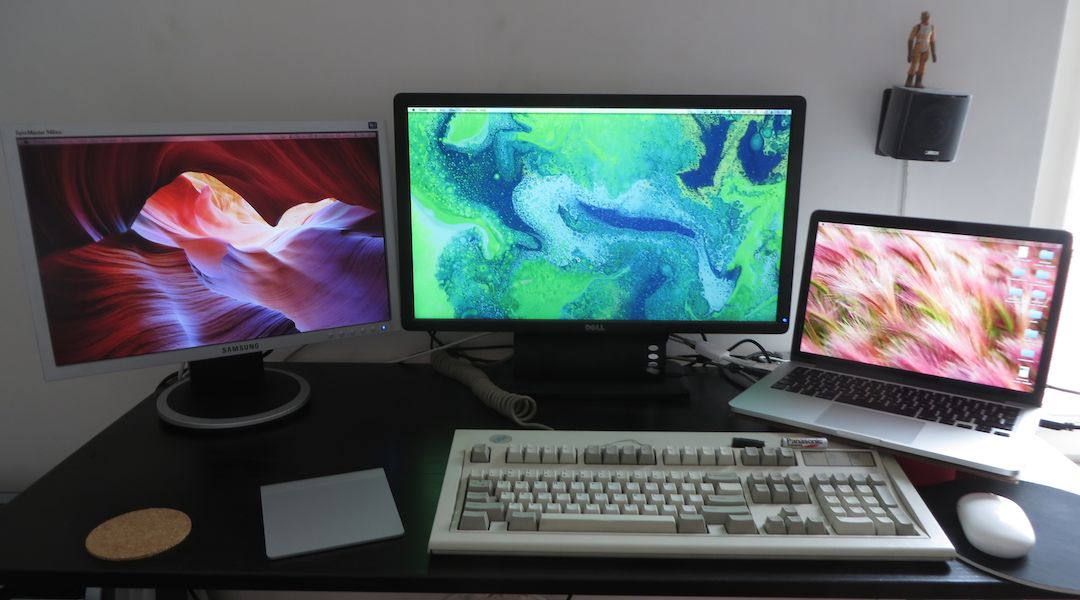 The Thunderbolt ports can handle resolutions up to 2560x1600. This is strange, because the upcoming Mac Pro is supposed to be able to handle 4k screens over its Thunderbolt 2 ports, and the MacBook Pro can handle 4k resolutions (3840x2160 at 30 Hz or 4096x2160 at 24 Hz) over HDMI. The framerate is probably limited by the HDMI bandwidth, which wouldn't be an issue for the Thunderbolt 2 ports, which presumably support DisplayPort 1.2. Maybe this limitation will magically disappear when Apple starts selling 4k displays.

I did consider going for the larger 15" MacBook Pro, but ultimately decided against it because it has slightly poorer battery life and is heavier, which are certainly downsides when traveling. The € 500 price difference is also too steep if, like me, you don't really need the quad-core CPU.

I'm very happy with this new computer. The only thing that's less than impressive is the CPU speed. It's certainly not bad—the computer feels fast with pretty much everything I do. (Except starting and quitting iPhoto.) But if your current Mac is one, two or maybe even three years old and you're looking for more CPU speed, you'll probably want to wait for Intel's Broadwell chips in 2014 or 2015.

What Apple has done with the late 2013 MacBook Pro is remove all the bottlenecks. Nearly all the I/O is a lot faster than on my old MacBook Air, I can now use two external screens and still use Gigabit Ethernet, even though with 802.11ac I don't need wired Ethernet as much as before. The screen is absolutely amazing. So is the battery life. There's nothing standing in the way of your productivity. Or enjoyment.