The tag line for World IPv6 Launch ten years ago was "the future is forever". You know what else seems to be forever? The past. Let's talk about IEEE 802 LLC/SNAP encapsulation.

I always thought when you send IP packets over Wi-Fi, the IP packet would go inside an Ethernet frame, and then the Ethernet frame inside an 802.11 frame. Turns out this is not how it works: there is no Ethernet header inside IEEE 802.11 packets/frames¹.

Bridging is the process of translating one OSI layer 2 frame format to another. In this case, a Wi-Fi access point translates between the Wi-Fi 802.11 header and the Ethernet II header.

Which creates a bit of a problem, as the 802.x family, including 802.11, doesn't do ethertypes. So how do they make sure different packets, such as IP, ARP, IPX, AppleTalk, Wake-on-LAN, et cetera are interpreted correctly by the receiver? Their first try was the LLC header. But that didn't accommodate a sufficiently large number of possible protocols. So add to LLC the SNAP header. The ethertype goes inside the SNAP header. So now we have all the information we need to translate between 802.x protocols (such as 802.11 Wi-Fi) and Ethernet II. The slide below that I copied from this presentation shows how that works: 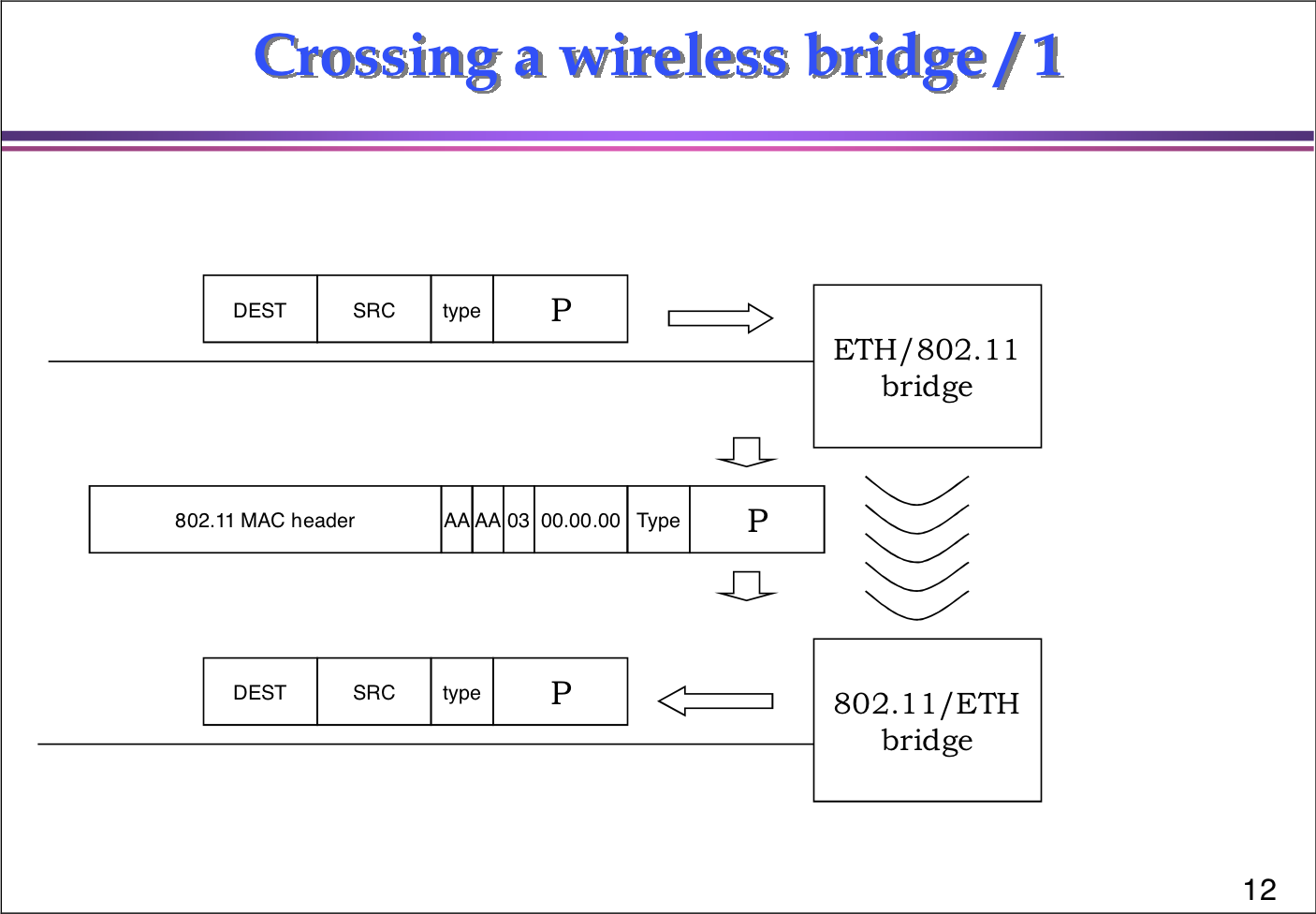 (Where DEST and SRC are the MAC addresses, type is the ethertype, and AA AA 03 00.00.00 are the values in the LLC and SNAP headers preceding the ethertype. P is the IP packet. Also see the last image here for an actual packet dump.)

Well, kinda-sorta-but-not-really. Remember that Ethernet was developed by the DIX consortium (DEC, Intel, Xerox) and then handed off to the IEEE for further tinkering and standardization. As a result, there is a difference between the old Ethernet II header, which has the ethertype, and the 802.3 header, where the same place in the header is actually a length field. (Which we don't need, the Ethernet hardware can tell how long packets are just fine by itself.)

So for IP over actual IEEE 802.3 you need at least the LLC header (which supports IPv4 and ARP) but in practice IP over 802.x always uses LLC+SNAP.

So IP over Ethernet II is actually a relic from the past. But still quite alive. Novell did move to LLC and SNAP, but this just meant that there were now four different frame formats to choose from in your IPX network, and having four incompatible ways to do the exact same thing is never helpful when running a network.

¹ Remember, OSI layer 2 has frames, OSI layer 3 packets and OSI layer 4 segments. So the TCP segment goes inside an IP packet and the IP packet inside an Ethernet frame, each layer adding a header and sometimes a trailer with information relevant to that layer.