4k displays have gotten pretty affordable now, do I decided to get one. I went for the Dell P2415Q, which I got for a little under 400 euros. However, it was on backorder everywhere when I ordered it and it took six weeks to get here. Perhaps Dell is discontinuing this display?

3840x2160 is twice as many pixels as the 2560x1600 of the internal screen, and four times as many as a 1920x1080 HDTV resolution screen. And unfortunately, the 2013 13" MacBook Pro simply can't push that many pixels out at the regular framerate of 60 Hz: you have to run a 4k screen at 30 Hz. (Or get a 15" MBP or this year's 13" model.) I was a bit worried about this, as it makes any movement on the screen, such as scrolling, much choppier. In practice, it hasn't been a big deal so far. Yes, scrolling Safari windows is a bit choppier, but it's not like that's always silky smooth at 60 Hz, and also not exactly a huge deal anyway. But for things like gaming and video, this can be more annoying and even potentially be a deal breaker. Note that 30 Hz means the Mac updates the screen 30 times per second, but between those updates the screen doesn't flicker, so for non-moving content 30 vs 60 Hz doesn't make any difference.

But I'm getting ahead of myself. After setting up the display and hooking it up to the Mac using the supplied miniDisplayPort-to-DisplayPort cable, the screen came on at 2560x1440 at 60 Hz. Which certainly isn't terrible, but not as nice as the native 4k in HiDPI (pixel doubling) mode. The Mac didn't have any options to change to 4k resolution. However, out of the box, the DisplayPort Multi-Stream Transport (MST) option isn't turned on. After enabling MST and setting the screen up as the primary, the only thing I got was a black screen. Unfortunately, making any changes was impossible at this point, because the menu doesn't come on if there's no valid DisplayPort signal and the option is grayed out when using the HDMI port. However, after half a minute or so the display said there was no signal, and asked if I wanted to switch to secondary mode. I did, and after that the screen came on in 3840x2160 mode at 30 Hz. The Mac offers the following resolutions: 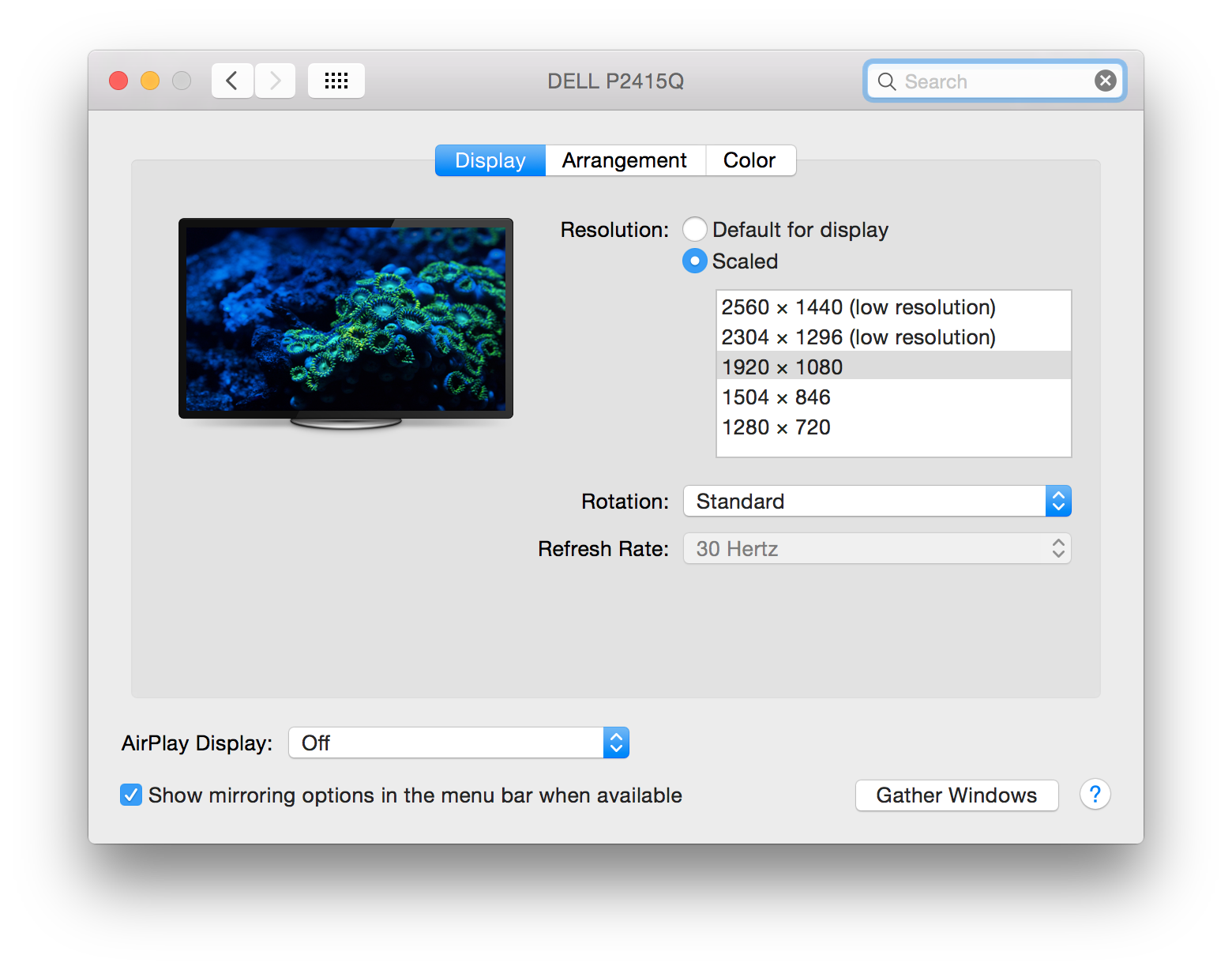 I'm not sure what the deal is with only recognizing the display's resolution with MST turned on and then addressing it as a secondary display. The P2415Q has a DisplayPort and a miniDisplayPort input and an HDMI input—but no VGA. It also has a DisplayPort output, which allows you to daisy chain a second display. So I hooked up my U2312HM to the P2415Q, hoping that I'd be able to use both screens using a single port on my computer. But that didn't work—the Mac doesn't recognize the second display. However, the P2415Q does forward the signal to the U2312HM, so when using a resolution that the U2312HM supports, both screens will show the same image.

I mirrored all the displays, optimizing for the P2415Q's resolution. You can of course also use each screen independently, or close the lid of the laptop and only use one or both external displays. I thought that when using only the P2415Q and not the internal screen, perhaps there would be enough bandwidth to run the monitor at 60 Hz, so I used SwitchResX to set up a custom resolution for that. But that didn't work. However, SwitchResX does let you run the display at many different resolutions and framerates, such as 24 Hz which is much better for a lot of video content that is 24 Hz.

Note that I actually had the lights on at full brightness, the screens are just so bright that the room looks dark. This was always an issue with the U2312HM: even at its lowest brightness, it's very bright and hard to use in a dim room at night. The P2415Q is much, much better in this regard. It also has much better saturated colors at 99% of the sRGB gamut and the contrast is better. However, the MacBook Pro's internal screen is still a bit nicer in this regard. But the P2415Q comes with a factory calibration report!

This is what text looks like on the U2312HM:

A very nice feature of the P2415Q is that it has an audio out port. This means you can send audio over DisplayPort or HDMI and listen to it using speakers hooked up to the display. The audio is automatically routed to that port when you connect the Mac. The monitor also has a built-in four-port USB 3 hub, which I use for hooking up my IBM Model M keyboard and my Anker USB 3 to Gigabit Ethernet adapter. Unfortunately, all the USB ports are on the back of the monitor. Also, for some strange reason Dell removed the option to automatically select the right input. However, you can set up two of the buttons to select an input with just two key presses.

I tried to use the DDC Panel utility to change the display brightness from the computer, but that made my computer hang.

After using it for 24 hours, I really like this display, and expect to get a lot of use out of it. Highly recommended.

Update: on Twitter, someone mentioned issues with 4k screens being recognized as TVs and showing poor colors in YCbCr rather than RGB mode. Fortunately, it looks like I'm not having this issue, according to the System Information tool:

Update 2: the pixel depth info doesn't tell you whether the video is sent as YCbCr or RGB. What you need to look for is "Television: Yes":

That's with my MacBook Pro hooked up to my HDTV through the Onkyo receiver: 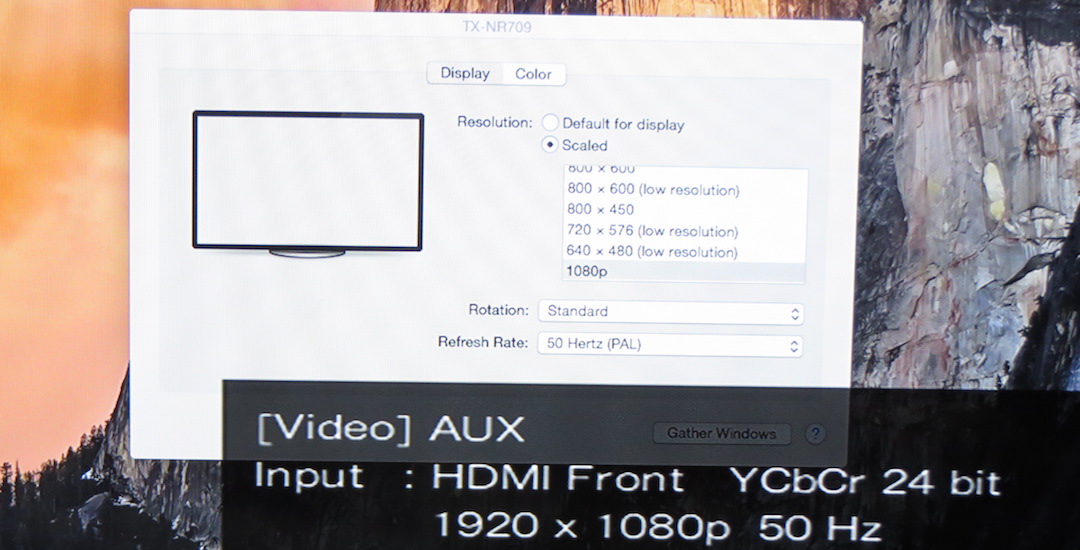 For some strange reason, the MBP now thinks the HDTV supports the same resolutions as the Dell monitor. Although that's not completely unexpected as the Onkyo supports 4k, it didn't used to do that before. The only way to select 1080p as the resolution is to click "Scaled" in the display setup in the System Preferences while holding the alt/option key. Then you get a lot of other options. Unfortunately, even that way I only get 30 Hz as the refresh rate for the Dell P2415Q.