Last year I wrote posts about listening to the radio, watching TV and having a landline phone in the 2020s (in Dutch). Today, I want to talk about the place left for optical storage in the 2020s.

Do I actually want or need those shiny optical discs in my life?

The short answer: most people probably don't. Software is now always available online, so you don't need an optical drive to install applications or drivers. For music, you can get pretty much everything through streaming services such as Spotify. And if you bought CDs back in the 1990s, you'll certainly have ripped those by now. I think you can watch pretty much any movie on one online service or another. Current TV shows are also generally available on a streaming service.

Transitioning to the disc-free lifestyle

But what if you bought movies and TV shows on DVD in the past, and used to burn some of your data to CDs and/or DVDs? You really want to go over all your data CDs and DVDs and copy those to a harddrive while you still have a working optical drive. That optical drive will die at some point (or become unreliable to the point of being unusable). You can of course then spend less than $/€ 50 for a DVD drive and handle this chore then, but why wait? Those CD-R and DVD±R organic dye layers aren't getting any better as they age.

I'm not sold on the option to rip all my movies and TV shows on DVD and blu-ray to my NAS or an external HDD. That's just way too much data. For movies, I don't have too much of an issue with simply using my blu-ray player (the one connected to my TV) to watch them. Yes, finding the right disc and then waiting for the drive to do its thing and having to deal with unskippable warnings and annoying menus isn't great, but that's only a minute or so vs a movie that's at least 90 minutes.

For TV shows, this is quite different. Especially when I want to watch a 22 minute sitcom episode (and boy, do I love those turn-of-the-millennium sitcoms!), having to wait for the player to do its thing and then the warning and menus and me forgetting which episode was next, it's all quite annoying.

So what I used to do before my the Apple USB Superdrive that I got in 2011 kinda-sorta died recently, was rip TV shows from DVD and then use Handbrake to convert them to H.264 format, put in all the iTunes metadata using Subler, and store those on my NAS. However, that is quite a lot of work and eats up quite a bit of storage.

Then I found an easier way to handle TV shows on DVD (and, to some degree, blu-ray): MakeMKV. MakeMKV is an app that, well, makes MKV files. You can use it to rip DVDs (easy), regular blu-ray (a bit more difficult) and UHD/4K blu-ray (when the stars align). My new blu-ray burner mentioned below didn't give MakeMKV any trouble when ripping DVDs, even region 1 ones on this region 2 drive.

For DVDs with TV shows, it's relatively straightforward to select the right tracks and turn those into .mkv files. However, MakeMKV doesn't do any transcoding. So the video is still MPEG 2, and the audio is still the same (usually) AC3. This means the files will be unplayable in many places, including iTunes and the iPhone/iPad.

However, my LG TV is more than happy to play these files. And, being a TV, it handles the intricacies of framerates and deinterlacing well automatically. fSo I just rip one DVD at a time, put the MKV files on a USB flash drive, and stick that in one of the USB ports of my TV. Yes, the files are three times as large as compared to the handcrafted H.264 versions, but I don't have to think about any settings and just delete the files after watching. Should I want to rewatch the same show a few years from now, I can always rip the same DVDs again.

Like I said, my Apple USB Superdrive is no longer working properly, and the idea of having a big box full of music CDs and a smaller box full of data CDs and DVDs that I can no longer read bothers me.

So I decided to get a new external USB optical drive. One that can read and write blu-ray discs in addition to CDs and DVDs, of course. I also had a look at UHD blu-ray, which is used for 4K content on blu-ray. However, reading those requires firmware modifications, if possible at all. Dive into the MakeMKV forums to figure that out. 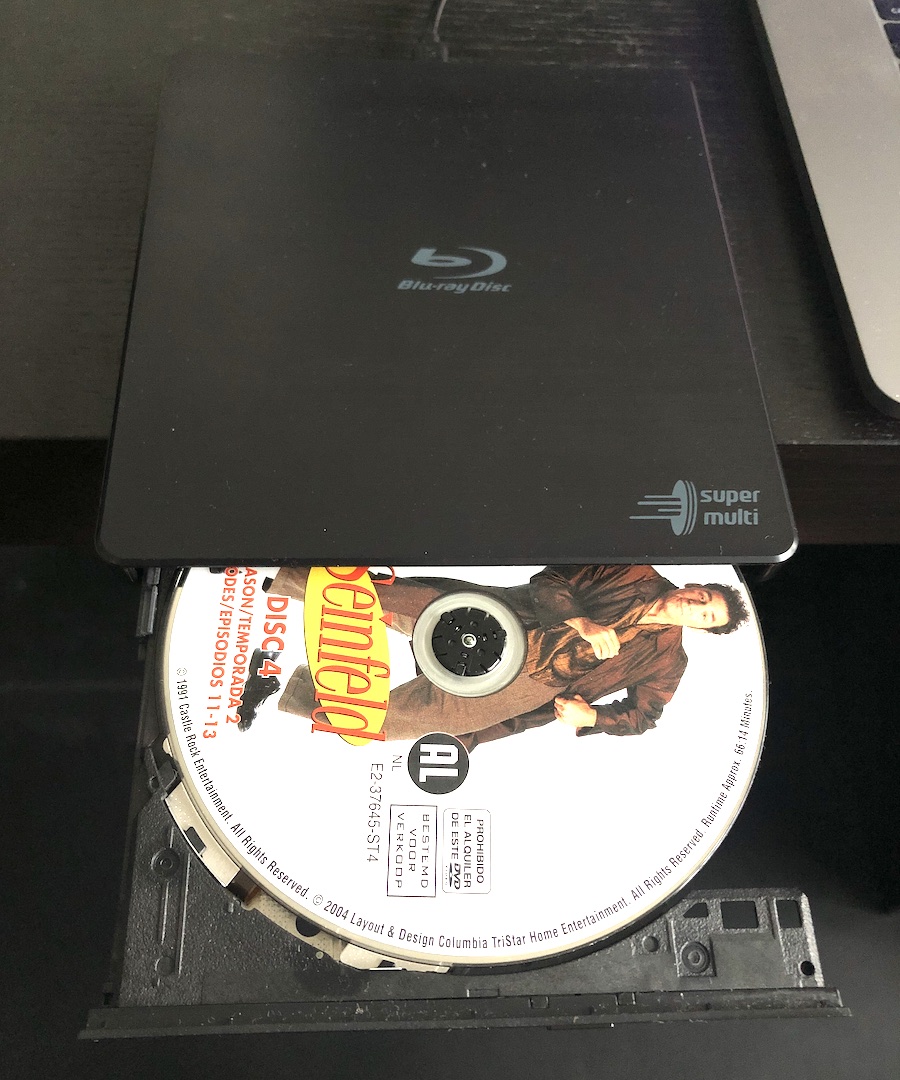 So I ended up ordering a Hitachi-LG BP55EB40 "Slim Portable Blu-ray WRITER" for a little under € 100. Optical drives used to have some issues with the amount of power provided by the USB2 bus in some cases, but that doesn't seem to be a problem anymore. You'd think USB3 would solve that, but no, as the datarates required for 6x speed BD, 4x speed BDXL (100/128 GB blu-ray), 8 x DVD and 24 x CD reading and writing fall well below what USB 2.0 can handle, that's what we get. The drive pretty much handles all the formats: 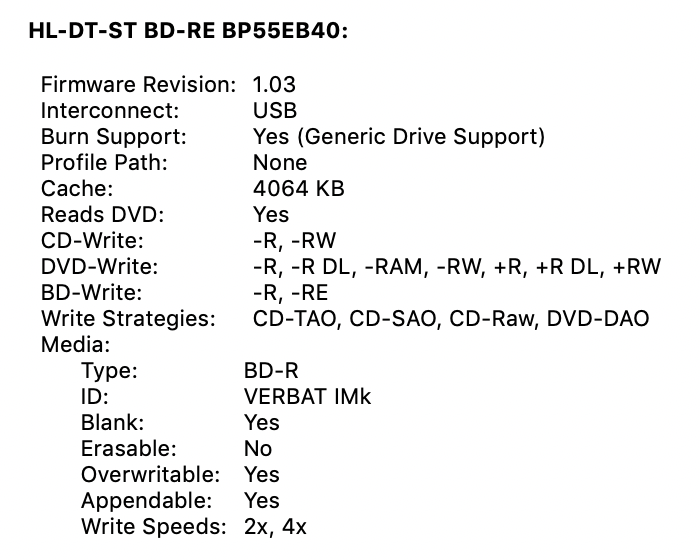 It will also write M-DISC discs. Those are recordable DVDs or BDs that use a special material for the recordable data layer(s) that should make them last for a thousand years.

I'm not sure if my data still needs to be available in the year 3022, and it probably won't be, even on an M-DISC, but given that my failure rate from the DVD-Rs that I burned between about 2003 and 2013 is quite low (maybe 1 in 25 is no longer readable), an improved type of recordable disc seems like a good bet for things that need to last a few decades.

The advantage of an optical disc as an archival medium is that it only includes the data, not any electronics or logic. It's also fairly small and especially flat, so you can mail them or store them in a folder or safe deposit box and not worry about shocks or drops. A couple of years ago, I wrote about using flash for archiving, purely based on price. However, as flash capacities have gotten larger, especially for USB thumb drives and SD cards, their reliability has dropped. This is not a technology appropriate for long time archival storage.

Also, unlike storing data on a (possibly archival) hard disk drive (HDD), burning a disc is a one-time thing, so it encourages careful consideration of what needs to be archived in what format.

Although I think it's possible to leave the optical past behind, I do think keeping an optical drive around to rip TV shows and burn archival copies of my data is a good idea.